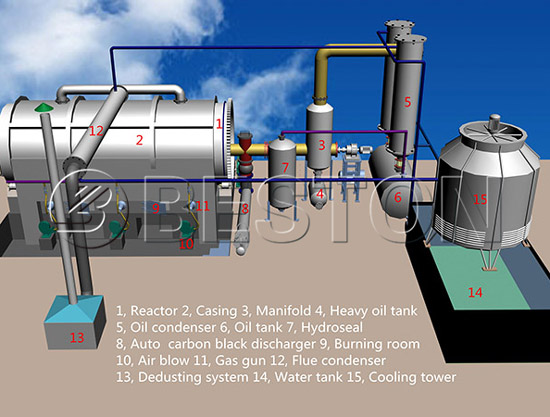 At a factory in Almeria, on the southern coast of Spain, Michael Murray, the CEO of the technology company Cynar, makes an impressive demonstration. A video on Cynar’s website shows him filling a glass bottle with a soup distilled from plastic, then marching outside. In a sport coat and rubber gloves, he pours it into the gas tank of a Toyota Land Cruiser. Then he cranks the ignition and drives off.

This isn’t just a trick; it’s a business plan. Murray intends to convert millions of tons of plastic waste into a synthetic fuel. The factory, which licenses his technology, opened late last year and is already digesting just under one ton of plastic an hour. That translates into 3,693 gallons of diesel a day, enough to fill 230 midsize cars. “I watch this crap going in, smelly, stinky stuff, and get out usable fuel,” Murray says.

The chemical process Cynar has mastered is called pyrolysis. It essentially returns plastic to its original state: oil. First, the plastic must be cleaned, shredded, and heated in the absence of oxygen. Instead of burning, it melts to the consistency of chewing gum, and then vaporizes into a hydrocarbon cloud. When the cloud cools, the vapor condenses into a liquid that can be refined to diesel, kerosene, or light oil and used with any car or generator.

But Cynar’s fuel is much cleaner than its conventional counterparts. It produces 20 percent less tailpipe emissions than fossil fuel sold at the pump, according to an analysis by the University of Dublin. And it has the advantage of giving multiple forms of discarded plastic—including grocery bags, polystyrene trays, and even patio furniture—a second life.

Murray has bet nearly $20 million and the past 11 years on his plastic fuel. But to hear him tell it, his hard work is just making amends for the excesses of his youth. He grew up in Dublin with a speed-racing habit: cars, boats, planes?—“anything that’s got an engine, I raced it,” he recalls. After years as a gas hog, his lightbulb moment came when he was throwing away a printer cartridge. There has to be another use for items like these, he thought. A seasoned entrepreneur, Murray decided to try to commercialize pyrolysis.

While pyrolysis isn’t new, only recently have technological advances made it scalable, affordable, and profitable. Cynar’s diesel costs only $1.75 per gallon to produce. The price of oil, however, has been dropping fast. At press time, it was $56 per barrel and sliding south, right into potential profits. But Murray takes the long view: He wants to bring his technology to developing nations, places with huge landfills and big energy deficits. He is in talks to build a plant in East Africa and also has his eye on the small island nations in the Pacific that he has sailed around. “Some countries have so much plastic trash, but import oil,” says Murray. “Imagine if they had a way to get energy from their plastic waste!”