KUCHING: Where do used, bald tyres go after vehicle owners replace them? Is this the end of the lifespan of a tyre?

The answer to the latter is ‘no’, as these tyres can be recycled into tyre crumbs and made into a whole lot of other things.

As for the former question, these used tyres are collected by ZHA Environmental Sdn Bhd (ZHA) from vehicle repair workshops and those irresponsibly discarded by the roadside.

“Many people, especially in Sarawak, do not know what happens to discarded tyres or that it is even possible to recycle them. In fact, they may even be using products made from recycled tyres,” said ZHA general manager Bernard Yong during a recent interview. 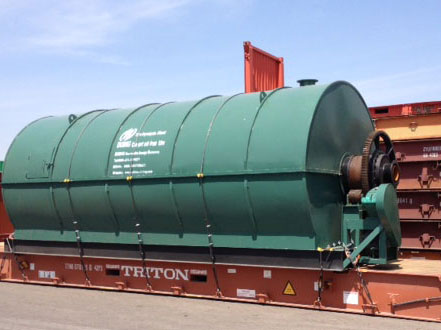 Among the items that can be made from recycled tyres are car floor mats, brake pads, rubber tiles and artificial turfs at football fields.

Over the years, there have been many developments to improve the performance of a tyre.

The modern tyre is designed to be tough and able to withstand extreme weather.

However, these characteristics become an environmental problem once the tyres are discarded as they will not biodegrade due to their high durability, Yong explained.

“With the number of vehicles on the road growing rapidly, used tyres are now one of the largest and most problematic wastes in our country. Without a proper disposal system, used tyres will end up being dumped indiscriminately.

“Due to heat retention, illegal tyre stockpiles are also prone to tyre fires. Tyre fires are extremely difficult to extinguish. It can burn for months and emits unhealthy smoke laden with toxic chemicals,” he said.

Alternative methods of recycling tyres such as the pyrolysis process which converts used tyres into low grade oil are at risk of fire and explosion.

There have been numerous cases of explosions in pyrolysis plants, with the most recently reported case occurring in Perak early this year.

Some pyrolysis plants are operated without proper approval and waste treatment facilities in place, resulting in emission of toxic gases and illegal dumping of by-products known as ‘char’.

This has prompted many governments throughout the world to ban and close down unauthorised pyrolysis plants, said Yong.

As of today, one of the most environmental friendly methods of recycling used tyres is to convert them into rubber crumbs, which is what ZHA is doing.

This is done mechanically by shredding and granulating tyres into smaller crumbs.

As this process is done under ambient temperatures, there will be no emission of toxic gasses or risk of explosions.

The state government has also embarked on an initiative to provide a holistic and environmental friendly system to manage used tyre waste in the state.

Its agency, the Natural Resources and Environment Board (NREB) was given the task to become the regulatory, supervisory, and licensing authority for this project.

In 2011, the state government appointed and licensed ZHA to collect and recycle used tyres in the state. Now the pioneer in collecting used tyres for recycling, ZHA’s Used Tyres Waste Management Facility operates from an eight-hectare site in the Matang Integrated Waste Management Zone and collects and recycles an estimated 500 metric tonnes of used tyres – able to fill two football fields – every month.

This state of the art facility has won numerous awards and certifications. Among them are the 6th Chief Minister’s Environmental Award (CMEA) 2014, ISO 9001:2008 certification and Green Project certification, which was awarded by the Ministry of Energy, Green Technology and Water.

The rubber crumbs produced by ZHA are sold locally and exported overseas to countries such as Thailand, Indonesia, Australia and Singapore.