Akron, Ohio based plastic to fuel technology manufacturer, RES Polyflow has successfully completed the scaling-up of its facility to demonstrate its energy recovery technology, with results that met or exceeded its expectations.

Supported in part by an Ohio Third Frontier grant, the company said that its demonstration campaign conducted throughout the summer of 2013 has proved that its waste plastic conversion process is stable and efficient in a full-scale production environment.

RES added that the process also enables all material inputs and outputs to be managed on a continuous process basis. 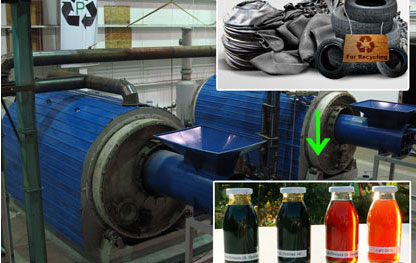 According to the company, at the core of its technology is a process vessel with the ability to handle up to 60 tons (54 tonnes) per day of mixed polymer waste plastics that other recycling systems typically have to discard in landfills.

By utilising lightly sorted and unwashed polymer stream, the company explained that it makes preparation of materials less labour and capital intensive for operators.

The process thermally deconstructs hydrocarbon based materials, such as end of life plastic and rubber, and converts it into new molecular structures that can be marketed as transportation fuels as well as feedstocks for new polymer production.

RES added that it works in a low temperature environment at atmospheric pressure and does not require a catalyst, while the continuous feed material conveyance system is said to allow for stable and predictable production cycles.

The resulting product is processed using equipment that consists of various distillation and treatment stages that separate the liquid output into a variety of market ready fuel and aromatic components.

The finished product is claimed to be a light, sweet liquid known as pygas which is marketable to a variety of industries and is equivalent in quality and consistency to benchmark crude oil.

The company explained that the pygas can be tailored to the specific requirement of an off-take customer, with diesel fuel, octane enhancers and gasoline blendstocks among the cuts that can be yielded.

Additionally, RES said that refining equipment can be installed to further extract valuable aromatics from the finished product which in turn can be marketed to a broad audience of petrochemical blenders and manufacturers.

By-products of the production process include an inert char and a light non-condensable off gas, which the company said can be safely disposed of or used as a source of energy for the production vessel itself.

RES added that alloys from tire wire, e-waste and other consumer products remain intact due to the low temperature process conditions and can be recovered for recycling as scrap metal.

RES said that it intends to pursue various avenues of next-stage growth, including the possibility of converting its Perry, Ohio demonstration site into a fully operational production facility over the next 12 months.

According to the company, a number of independent plant owner/operators attended the summer demonstrations and are now in negotiation it to license the technology for implementation in North America and overseas.

The company previously announced a joint venture agreement with a Las Vegas based group under the name ENRETEC to commercialise the technology in specific western U.S. markets.
Article source: http://www.waste-management-world.com/articles/2013/10/waste-plastic-to-oil-conversion-technology-ramps-up-to-scale-in-ohio.html