Tonnes of plastic dumped every day has been a matter of great worry for the world including India. Left with no other solution, governments in many states have put a ban on the use of plastics.

However, one entrepreneur from Muzzafarnagar in Uttar Pradesh has developed a way to turn plastic back into its original form.

Managing Director of Bindlas Duplux Limited, Pankaj Aggarwal says he discovered a way to convert plastic back into oil. According to him, his discovery was acknowledged by a team from Massachsetts Institute of Technology (MIT) as well.

“MIT team had come to our plant to research this and they agreed that the project was the first of its kind in India and also rare in world. They haven’t come across such a project elsewhere in the world,” the entrepreneur said. 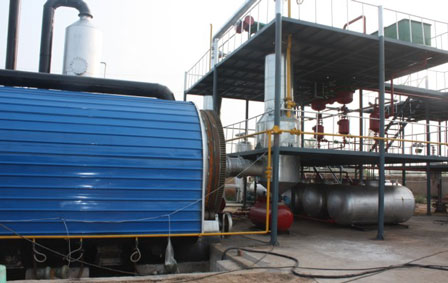 On his discovery, “After all, plastic comes from oil, so why can’t it go back to oil? That’s what I thought when I considered the problem of the piles of plastic trash accumulating around the world,” said Aggarwal.

In his opinion, plastic which becomes trash remains valuable.

“It’s made from oil so it wouldn’t be difficult to convert it back to oil,” he reasoned.

Using heat and pressure, his machine can convert plastic trash in a few hours into unrefined oil, composed of kerosene, diesel, gasoline, and heavy oils.

Subsequently, a pipe running from the heating machine to a container of tap water puts the resulting gas through a filter and into the water, which breaks it down into H2O and CO2, leaving behind no odour or release of CO2 into the atmosphere.

The unrefined oil can be immediately used for industrial machinery and other uses where refined gas is not required for operation.

Now, Aggarwal’s target is to change the mind-sets of people about plastic trash.

“It is not garbage; therefore, just as people collect paper, they should also start collecting plastic. I think once people know the value of plastic, and that it can be converted into oil, they will not throw it,” he added.

He now wants to get households involved in collecting plastic trash from their houses and neighbourhoods and help them make oil for use in generators and for power.

Thus far, it was common knowledge that plastic can only be reused as plastic. Further the process to do so has been complicated.

India generates 15,342 tonnes of plastic every day – a fourfold increase since 1999 – and there will never be enough sites to dump it.

“We are sitting on a plastic time bomb”, the Supreme Court had said once.

The need, therefore, is proper recycling of plastic into a non-hazardous and useful form. But the norms laid down by the municipal solid waste (management and handling) rules are still not strictly observed.

Aggarwal is also working on two other similar projects of recycling factory waste such as rice husk hair into black liquor.