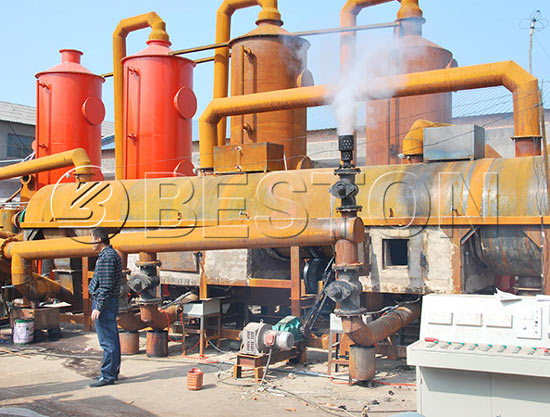 Organic material is composed of carbon and hydrogen and comes from five typical sources: garbage, wood, waste, landfill gases (leachate), and alcohol fuels (e.g. bioethanol, biodiesel). Most wood biomass used is actually a waste product itself the paper industry. Waste biomass can come from left over food from residences and restaurants, scraps from the meat and fishing industries, and farm waste. Landfill gas, called leachate, is primarily composed of methane, which is produced by rotting garbage. Alcohol fuels are usually derived from corn and sugar crops, and some controversy exists over whether money and acreage are better spent producing food or fuel.

Heat is the main component in the thermal conversion process of biomass into a useable chemical fuel. Combustion is simply the burning of biomass. The solid and gaseous wastes are then used as fuel. Torrefaction is the roasting of biomass, which is not directly exposed to flame. It is how wood is turned into charcoal. Pyrolysis is similar to torrefaction, but the aim is to cause the chemical components to separate rather than consolidate. Gasification uses heat and pressure, but no flame, to force biomass to emit gaseous fuels. Chemical conversion typically follows thermal conversion to make the biomass byproduct fuel more accessible, easier to transport and store, and more efficient. Biochemical conversion uses natural processes to change the biomass into fuel. Basic fermentation is an example of biochemical conversion of biomass, such as corn, into ethanol.

The use of biomass as a fuel reduced the dependency on oil for the production of energy. Biomass energy produces air pollution in significant amounts, but biomass production, such as the raising of fuel crops like corn, sugar, and switch grass, also sequesters large amounts of carbon, reducing its presence in the atmosphere as a greenhouse gas. The amount of carbon sequestered cannot compare to that contained in an untouched forest, and the use of forest residue as an energy producing biomass further increases the carbon footprint. This can be mitigate.

The use of beneficial biomass falls under the terrestrial carbon cycle. When bio-power is formed properly, emissions of biomass charcoal are recycled by future plant growth within a comparatively short period. The outcome is low net carbon emissions. Stocks of carbon stored in soil and plants is maintained well, often times increasing. Coal, oil, natural gas are displaced, preventing the burning of these fossil fuels and reducing carbon emissions into the atmosphere. What makes biomass a renewable energy source is that the energy comes from the sun and can also re-grow in a relatively short period of time. Chlorophyll in plants acquires the sun’s energy by converting carbon dioxide from the air as well as water from the earth into carbohydrates.