Turning water into wine is pretty neat, but one company is turning end-of-life plastics and rubbers into crude oil in North Perry.

Akron-based firm RES Polyflow broke ground on its patented conversion vessel in October 2012 at the South Shore Controls campus on 4823 North Ridge Road and just this past August, the company finished five months of trial work.

“What that did is prove that our chemistry could scale up,” said Michael Dungan, director of sales and marketing at RES Polyflow. “So we went from a very small pilot unit in Akron and brought the same process to a full-size and full-scale unit (in North Perry).” 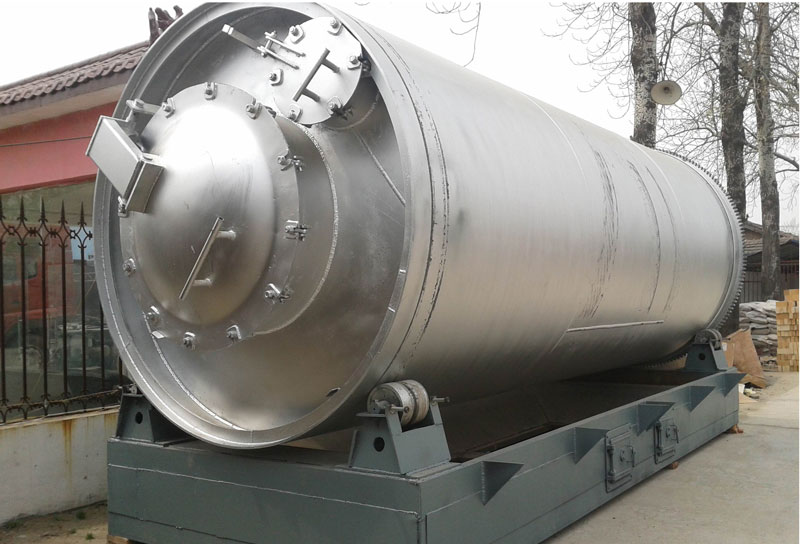 Dungan said at full capacity, a conversion vessel can eat up to 60 tons of shredded plastic and rubber a day and turn it into 288 barrels of crude oil through a process called pyrolysis.

Dungan said RES Polyflow has patented its process of pyrolysis in the United States and 17 other nations, which is important because although pyrolysis isn’t new to the industry, the company’s process is unique. That’s because no extra labor is involved of isolating the rubbers or plastics from everything else, said both Dungan and RES Polyflow President Jay Schabel.

For example, the vessel can take a jar of peanut butter without someone or some machine cleaning out its contents.

“The reactions that occur within that large tank are different than our competitors, which allow us to take in a broad mix of polymers … and as that changes, our end product doesn’t change,” Schabel said.

Schabel said his company’s primary focus is to build and sell vessels to companies, municipalities or landfills.

“Nothing secured yet,” Schabel said. “We’re working with multiple customers to move them down the path. It’s a bit of a long process to get the projects they’re looking at to the final stage.”

The 5-year-old company partnered with more than a half dozen organizations and companies to get where it is. And a lot of that networking was done through NorTech and its Speed to Market Accelerator program.

RES Polyflow is one of 32 companies, or clusters, that have gone through its program, said Byron Clayton, NorTech vice president of cluster acceleration. NorTech is a technology-based economic development organization working to revitalize Northeast Ohio by accelerating the growth of innovation clusters in advanced energy, flexible electronics and water technologies.

“We help them get to commercialization faster, and we send them through a process to see what they need to get to market,” Clayton said.

He said that includes connecting RES Polyflow to WIRE-Net, a nonprofit that specializes in supply chain development, and fellow cluster South Shore Controls in North Perry, which built the conversion vessel in addition to housing it. Clayton also said NorTech connected the company to Lorain Community College to help find interns.

“They’re on the verge of growing really quickly,” Clayton said, adding that the jobs generated by a company like this do not “go away over time.”

Schabel said the company has five employees now, but could grow to 50 when the company begins manufacturing vessels outside of the area.

In addition to connecting the company with others, NorTech was a partner in RES Polyflow’s application for an Ohio Third Frontier Grant. The company was awarded a $1 million grant in 2011 to pay for 40 percent of the equipment and vessel at the North Perry site, Dungan said. Schabel said the company also helped Youngstown State University secure a $600,000 grant to buy equipment and test the fuel their vessel produces.

Dungan said the vessel in North Perry is only a full-scale demonstrator as of now, not a plant that serves any community or company. He said its location in rural eastern Lake County isn’t strategic, and therefore may someday move closer to an urban landfill if it is purchased.